Starting in 1986, Election Data Services has produced posters depicting the election results from each year's federal November general election. Now in it's 16th version over the past three decades, the 2016 poster introduces new methods to analyze the surprising results of this year's presidential election. Besides the traditional red/blue depiction of the returns, this year seeks to show the change that took place between the 2012 and 2016 presidential elections. Two additional maps uses color intensity to depict the change in the percent of the vote that occurred over the past four year, while three-dimensional maps uses height to show the raw number change for each county. Additional bar charts shows the change in total votes cast for president over the past 16 years.

Continuing the practice started in 2010, both sides of the poster are utilized to provide the widest range of information. On the Legislative side, results of US House of Representatives are depicted by congressional district, while results for US Senate contests are shown at the county level. Statewide outcomes are shown for Governor, Control of State Legislatures, State Senate and State House party control, and vote for highest election official in the state. Finally a full list of the winners and the returning members, with their party, for Governor, US Senate and US House of Representatives appear across the bottom of the poster. 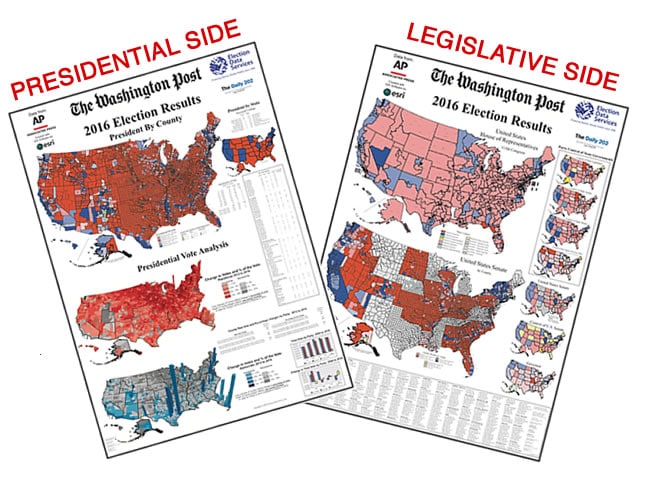