Starting in 1986, Election Data Services has produced posters depicting the election results from each year's federal November general election. Now in its 18th version over the past four decades, the 2020 poster focuses on the Presidential results on the front side, showing county level results of the final certified returns (including late absentee ballot counting) and following all recounts.  In addition, there is a separate county level map showing the percent change in the Democratic vote from Clinton in 2016 to Biden in 2020.  Charts showing nationwide votes by party and change in votes for the past 20 years.  Using county level data, tables show the number of counties that changed in their Presidential voting patterns from 2016 to 2020.  A separate table shows the Presidential vote results by counties that are categorized by urban, suburban, fringe urban and rural classifications.

The front also contains a summary of the election in an "At A Glance" table which shows the political composition of the US House, US Senate, Governor, Chief Election Officer, Overall State Legislature Control, as well as individual State Senate and State House compositions. In addition, the table shows the number of incumbent and open seats for each chamber's political composition, by party. The data is summarized for before the election, after the election, how many were switched to and how many were retained by each party.

The back of the poster depicts county by county contest results for US Senatorial election, and district level results for the contests for the US House of Representative. The printing of the poster was held so that the results of the January 5th, 2021 run-off elections for the two US Senate contests in Georgia could also be shown by county for the state. The back side also lists the names and party for the winners and returning members in each state for all Governor, US Senate and US House members starting in 2019, providing a convenient reference listing for your wall.

Continuing the practice started in 2010, both sides of the poster are utilized to provide the widest range of information. On the back side, results of statewide outcomes are shown for Governor, Control of State Legislatures, State Senate and State House party control, and vote for highest election official in the state.  Labels had been added to the State Senate and State House maps showing the number of members in the majority party, the minority party and any third party as of December 30, 2020, as collected by the National Conference of State Legislatures. 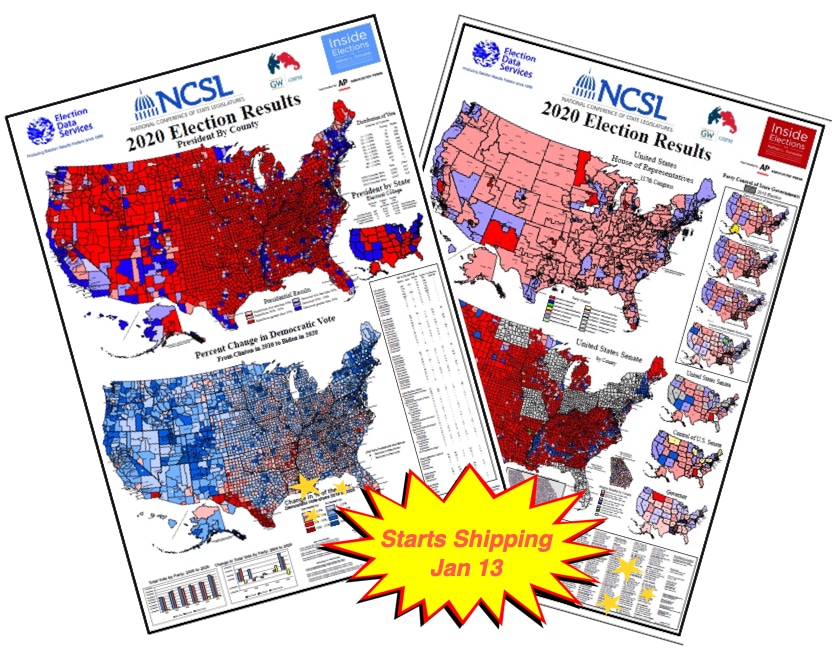