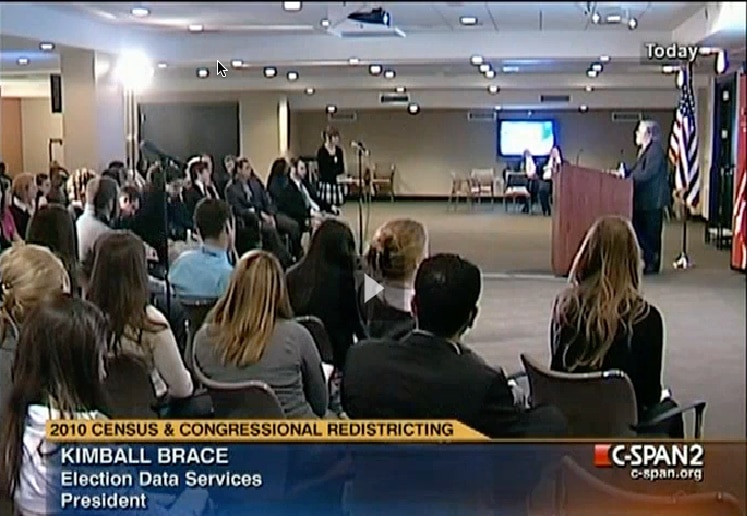 Election Data Services Inc. is a political consulting firm specializing in redistricting, election administration, and the analysis and presentation of census and political data. Election Data Services was founded in 1977 and over the past 39 years has developed a variety of consulting services and political information products for businesses, associations, and governmental organizations.

Election Data Services’ involvement in redistricting dates back to the late 1970s and projects for the Houston (Tex.) City Council and the Illinois and Michigan Legislatures. Election Data Services has since provided redistricting software, databases, and data analysis, consulting, and litigation sup­port services to governmental organizations in more than half the states in the nation. In the mid-1990s, Election Data Services developed software to assist states participating in the Census Redistricting Data Program – the Block Boundary Suggestion (BBSP) and Voting District (VTDP) Projects. The firm also developed software for the U.S. Dept. of Transportation to distribute to 400 metropolitan planning organizations (MPOs) and state transportation departments to delineate traffic analysis zones (TAZs) for the Census Transportation Planning Package (CTPP).

For the past four decades, Election Data Services, Inc. have been consultants to many state and local governmental organizations around the nation, providing strategic advice and consulting on redistricting matters, analyzing population trends, and advising their potential impact on the process, coordinating the development of extensive databases used in the redistricting process, creating and assisting others with the creation of districting plans, and analyzing many aspects of districts and district configurations. We have also been called upon to provide reports, expert witness testimony, and assistance to attorneys in more than 75 different court cases.

We're providing the same strategic, database building and consulting services for the 2020 redistricting process.  In some states we will be responsible for coordinating all commission/legislative meetings.   In addition, it is our standard practice to meet with every state legislator of both parties, in both chambers, to review the member’s district, its neighborhoods and the demographic characteristics of its voters. When the Census data is released, we will conduct regional meetings around the state to review what the numbers mean for representation.  We then work with legislative members, staff, and the public to draw potential plan configurations. Plan alternatives are then taken to various parts of the state for further public input, in most instances in conjunction with the redistricting commission.  Customation of these roles and duties are always available.

EDS, Inc. President Kimball Brace frequently gives speeches to groups and organizations and participate in numerous conferences and panels on various aspects of apportionment, redistricting, and the census. Since the early 1980s, he has been a regular participant and speaker at annual and bi-annual meetings of the Task Force on Redistricting of the National Conference of State Legislatures (“NCSL”).  He has also been on their faculty, as NCSL has conducted five regional “Get Ready for Redistricting” seminars each decade since 1980.

Brace was also appointed by the U.S. Secretary of Commerce to the 2010 Census Advisory Committee, a 20-person advisory board to the Director of the Census Bureau. This decade he was also asked to be NCSL’s representative on an on-going series of half-day small-group expert meetings, arranged by the Committee on National Statistics (CNSTAT), to delve deeply into and provide informal discussion/feedback with Census Bureau staff as they develop the differential privacy-based Disclosure Avoidance System for the 2020 census. Previously he was also sent by the U.S. State Department and the International Foundation for Electoral Systems (IFES) to the Central Asian country of Kazakstan to present a three-day workshop on redistricting. He is repeatedly called upon by members of the press with questions on redistricting, reapportionment, the census, election administration issues, and politics in general.

Over the past 39 years, Election Data Services has developed political information products that include congressional and legislative district boundary files and ZIP+DISTRICT data files linking postal ZIP Codes to congressional and legislative districts. With the Capitol Hill newspaper Roll Call, Election Data Services regularly publishes after each November general election a poster with maps showing the winners by political party of selected federal and statewide contests.