Starting in 1986, Election Data Services has produced posters depicting the election results from each year's federal November general election. Now in its 19th version over the past five decades, the 2022 poster focuses on federal offices (Congressional) results on the front side, depicting county by county contest results for US Senatorial election, and district level results for the contests for the US House of Representative. The printing of the poster was held so that the results of the later December run-off for US Senate in Georgia could also be shown by county for the state. The front side also lists the names and party for the winners and returning members in each state for all Governor, US Senate and US House members starting in 2019, providing a convenient reference listing for your wall.

A summary of the election in an "At A Glance" table shows the political composition of the US House, US Senate, Governor, Chief Election Officer, Overall State Legislature Control, as well as individual State Senate and State House compositions. In addition, the table shows the number of incumbent and open seats for each chamber's political composition, by party. The data is summarized for before the election, after the election, how many were switched to and how many were retained by each party.

Continuing the practice started in 2010, both sides of the poster are utilized to provide the widest range of information. On the back side, results of statewide outcomes are shown for Governor, Control of State Legislatures, State Senate and State House party control, and vote for highest election official in the state.  Labels had been added to the State Senate and State House maps showing the number of members in the majority party, the minority party and any third party as of December 30, 2020, as collected by the National Conference of State Legislatures.   County level results of 19 different referendums in 19 different states are also shown for a variety of different topics of national interest.See Ballot Measures Ideas table below.

The December run-off election for US Senator in Georgia and the Xmas holidays caused problems for our printer, and we are not expecting to receive the finished maps until December 22.  They will be shipped over the holidays, but hopefully late enough to avoid the pre-Xmas postal crunch with Xmas cards and packages.  Flat posters will be shipped in tubes with USPS tracking turned on with notices sent to the e-mail addresses submitted with your order. 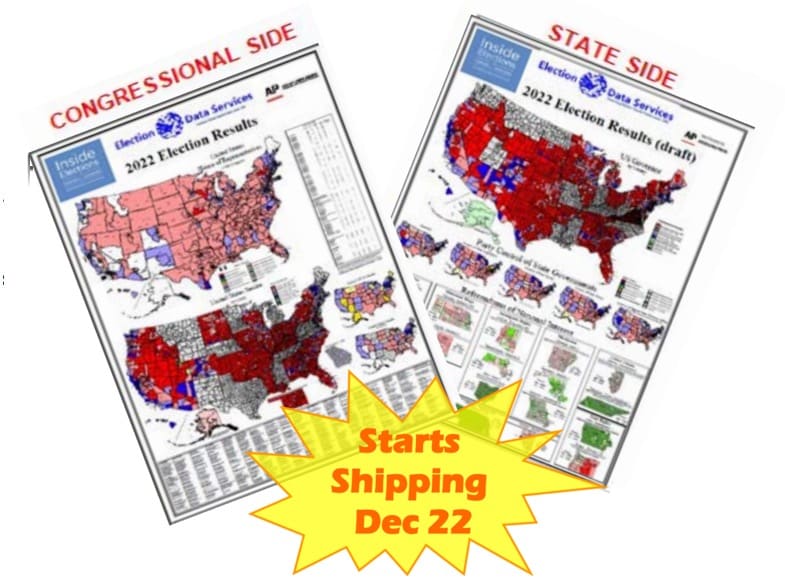